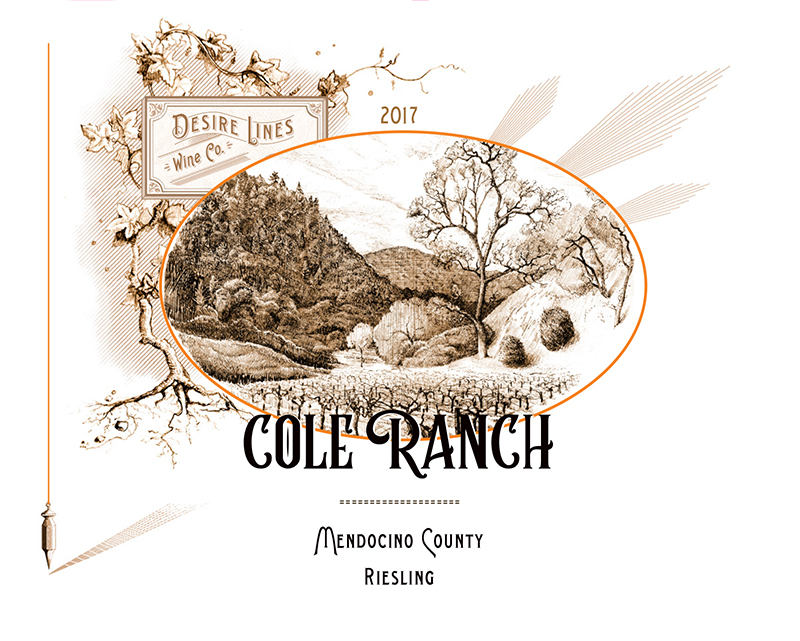 Cole Ranch is but a blip on the map of Mendocino County – at just 189 acres in total, with less than 50 acres planted, it is the smallest American Viticultural Area (AVA) in the country, and the only AVA with just a single vineyard. In this sense it is, like Coulée de Serrant and Château-Grillet in France, a very singular terroir. The vines were planted at Cole Ranch in 1973, making it (we think) the fifth-oldest Riesling vineyard in the state. The vineyard sits in a narrow valley in the mountains between Boonville and Ukiah.
The valley benefits from the cooling maritime influence of nearby Anderson Valley, and yet has a large diurnal and seasonal range of temperatures like inland Mendocino County. It snows in Cole Ranch once or twice a winter, and three years running we’ve begun the morning of the pick in temperatures below 30°. We are fortunate to work with the fruit, and grateful that John Cole thought to plant Riesling in his valley so many years ago.
Like the 2016 Riesling from Cole Ranch, the 2017 was whole-cluster pressed and fermented in neutral wooden barrels. 2017 was a warmer vintage relative to 2016, and thus the wine is richer and more tropical in flavor than the 2016. We racked the 2017 from neutral barrel to stainless steel drums in March, à la the wonderful Meursaults of Domaine Roulot, to encourage the wine to tighten up before the bottling in July. Like the 2016, the 2017 has six grams residual sugar and a 3.0 pH, our homage to the German Grosses Gewächs Rieslings.

Rated 93 points, Antonio Galloni
"The 2017 Riesling Cole Ranch is an exotic, beguiling beauty. Rich and luscious on the palate, the 2017 is decidedly flamboyant. Tangerine oil, passionfruit, honey, pineapple and sweet vanillin notes are all kicked up a few notches in the 2017. Rich and oily, but not at all heavy, the 2017 is a total rock-star wine with slight tropical accents that add to its sheer allure." - Antonio Galloni, April 2020
Sign Up to receive future Offerings